Today is Monday August 21, 2017, the day that crowds of people across the United States gathered to look up at the incredible Total Solar Eclipse. And many of them, armed with special solar filters, pointed their smart phones and hefty digital cameras toward the event to record and share.

But today a “new old” hero was reborn, once again proving its usefulness as it has for centuries – the pinhole camera. These little oldtimers were being promoted everywhere by NASA and Space.com!…

Learn The "Meditation on RAMA"

I am encouraging everyone to do this classic meditation given to us by Yogi Bhajan in 1975 as a means of balancing the Sun-Moon energies and with that the male-female energies. Specifically it improves communication and brings intuitive understanding of each others' words and meaning.…

August 2017 Numerology: The "Master Cycle" -A Time For Letting Go and Holding On! 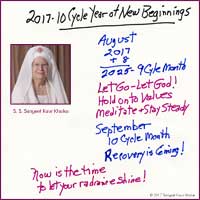 We have certainly seen a challenging year so far and I wish I could say that the worst is over. Unfortunately we still have a bit more to go to finish dealing with the emotional shock waves and tantrums of last year that have spilled over into 2017.

Now comes August – a 9 Cycle in the Planetary Numerology which can be an opportunity for achieving new levels of self-mastery or, unfortunately, taking a few steps backward. It can bring a spinning maelstrom with things that haunt us, temptations to revolt and run away, and little time for relief.

When I teach this special numerology (classes coming up Sept 15 & 16 at Anahata Yoga Studio) I always advise this is a time to do your best to be non-reactive.…

Read more: August 2017 Numerology: The "Master Cycle" -A Time For Letting Go and Holding On!

July 2017 Numerology: America - Good Fortune Shines on You This July. Believe and Prosper! 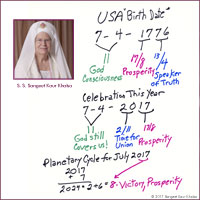 Today we celebrate the birth of our nation, so it is meaningful to reflect on both our roots as well as our present state and hoped-for future.

Using the Blessings Code™ numerology, let's look at the founding of America first.

When the American colonies declared independence the leaders knew the new country was on fragile financial ground. In many ways, it was bankrupt. Yet the patriots' courage, fortitude and God-centered values led them on to eventual victory. The young country would also grow to prosper as few nations on earth have done.

All this was set in the “birth numbers” of our country based on the date of the Declaration of Independence – July 4th, 1776!…