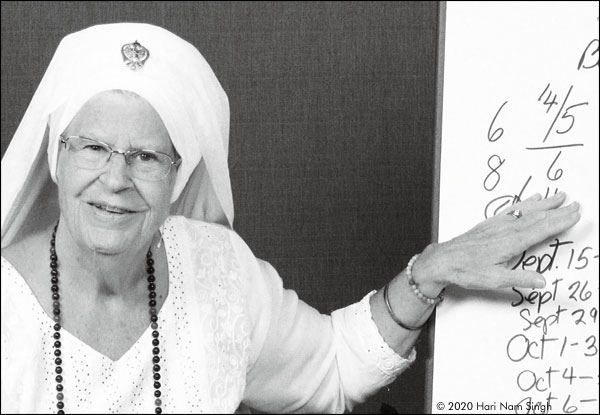 Sangeet launches a new short video series called “Numbers Behind the News” using her Blessings Code Numerology® System to gain insights into the news and people in the news.

In each of these three videos she takes a different approach to the Presidential candidates, the choices their souls made in this lifetime, and some of their current strengths and challenges. Sitting by her familiar flip-chart, she gives us a neutral apolitical perspective not intended to influence anyone’s vote.

Episode 3: “Mr. Biden, Mrs. Harris, Mr. Trump, Mr. Obama, And The U.S.A.” (14 minutes) (click HERE for video) gives us an unusual insight into the destiny of each of these prominent people.

Episode 2: “Mr. Trump, Mr. Biden, and the U.S.A.” (20 minutes) (click HERE for video) looks at the commonalities and differences between the two candidates, their current and upcoming Personal Annual Cycles, and their relationship to the birth-chart of our country.

Episode 1: “Donald Trump: COVID Conundrum” (9 minutes) (click HERE for video) addresses the question as to whether or not he contracted the virus and the particular challenges and strengths he has regarding immunity.

More episodes are planned both during and following the election which will be tied to the charts of both candidates and the progressed chart of the United States.

As Sangeet often declares, she’s “not a betting woman” so there aren’t any predictions of a winner. But if you recall in 2016 she did say that, given Mrs. Clinton’s Personal Annual Cycle at the time, it “would be difficult” to see her rising to the presidency.

Stay tuned for more episodes of “Numbers Behind the News.”

May your best numbers work for you,