Carried By The Chant

This past weekend Sikhs around the world gather to celebrate the birth of the fourth Sikh Guru, Guru Ram Das, born in 1534. For Sikhs and Kundalini yoga students worldwide he is known as “The Lord of Miracles.”

That indeed proved true, as revealed in this story Sangeet wrote for the Winter Issue of the Sikh Dharma Ministry newsletter. Her chanting for days to this great Master who resides with other Saints and Masters in the etheric realms did indeed bring miracles for her and her dear husband earlier this year when he underwent several surgeries and lay near death.

Below is the story reprinted with permission of sdministry.org and here is the link to the original story.

Bless you all, always,

Carried by the Chant 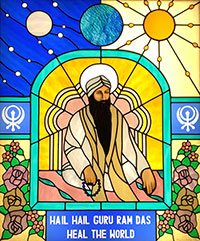 Of all the mantras and chants I have discovered, practiced, and loved over many decades, undoubtedly my number one choice is the Guru Ram Das Chant. Second only to the Mul Mantra, it is my go-to in times of trouble or discomfort, as well as in times of joy.

I remember in the late 1980s in New Mexico, at one of our summer yoga camps, sitting with a group of women in a very hot sweat lodge. In this detoxing, challenging environment it was difficult to breathe. A couple of people had already left.

Then one voice I recognized asked, “Sangeet, please sing the Guru Ram Das Chant.” I started, others joined in, and we chanted for 20 minutes until someone came to say we could leave. We all made it through. Guru Ram Das slowed our breathing, released the rising emotions, and kept us calm in a neutral mind!

Often through the years, this chant has held me and others in difficult situations. But nothing was as special, and as challenging as what happened this past February. At near midnight on January 31, my husband Hari Nam Singh collapsed in excruciating pain on the kitchen floor and was taken to the hospital emergency room. Diagnosis: badly swollen gall bladder.

The next day he underwent what was called a simple laparoscopic removal, after which he could go home in 24-48 hours. The next day, when doctors thought he was recovering nicely, the pain returned and it was discovered that he had massive abdominal bleeding, with blood pressure of 50 over 36. He was rushed to surgery.

Over the next four days, with three more surgeries and then a collapsed lung, he remained intubated, often requiring blood transfusions. Death was all around us in ICU, with at least three other patients succumbing during that time.

From the start in ICU, I began steadily chanting to Guru Ram Das. My dear love needed a miracle, probably several, and I knew who to call on. I was aware that my husband was unconscious and couldn’t hear me. But I knew part of him did, and I knew that Guru Ram Dasji did also.

Throughout the night, night after day after night, I chanted, my voice growing harsh, the pitch of my voice moving lower and lower to keep going. I played a recording I had made and when the battery died I called someone for another copy.

Folks tried to get me to go home to bed. No. I had to keep that chant going! The miracle-power of the Guru was carried on that chant. At times I would pause and say: “Hail, hail Guru Ram Das, Lord of Miracles!” And then ask: “Heal my husband and heal our world.”

On day six he was extubated (breathing room air). After he regained consciousness and clarity, he looked at me said, “I heard you. I heard you chanting to Guru Ram Das. I was in a very dark place and it was like a lighthouse. It brought me back.” And then he paused and said simply, “Please, don’t ever stop chanting.”

Miracles do happen. I celebrate this one and am so grateful to Guru Ram Das. He kept me strong and sane. I will always chant and spread the miracles and the healing presence of the God-awakened neutral mind within me. So I teach this chant to everyone.