I'm Back In The Saddle Again

That old familiar Western song – “I’m Back in the Saddle Again” - was recorded by the “singing cowboy” Gene Autry in 1939 in the year I was born, in fact only a few weeks before my birth. I grew up singing it and loving Gene’s depiction of the West -“out where a friend is a friend.” That line left me forever bitten by the lure of the West, a long way from my Philadelphia birthplace. 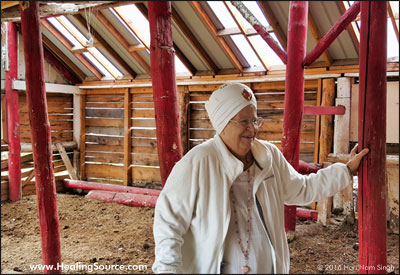 In 2016 Sangeet revisited the old Allenspark, Colorado stables where she first learned to ride. Here as a young girl, Sangeet learned to get "Back in the Saddle Again" many times. While the riders have long gone, the memories last forever.

[Ed. Note - Linda Wertheimer on National Public Radio did a great piece on Gene Autry and this song. Both the audio and written notes are HERE.]

When my little family traveled West in 1949, and again every summer until college began in 1956, I got “back in the saddle” many times, literally. I became an excellent horse-woman with natural ease, experiencing of course being thrown and bucked off more than a few times. Ouch!

There were many other times when I had to “get back in the saddle” and muster considerable courage. Many occurred during my 27 years in corporate New York, rising through executive ranks, then facing discrimination as a woman and then again when I donned the dress of a Sikh with the now-familiar turban and white garb.

At the worst of these times, my teacher, Yoga Master Yogi Bhajan, exhorted me during a crowded class, “You ride the horse, the horse doesn’t ride you.” So I was back in the saddle again! With his help and guidance, I won out against big challenges.

No year, however, in my life has presented as tough a climb-back-up-again as 2018.

The year 2018 was very rough for me, as many of you know. First there was a major spine surgery which was the followed a few days later by acute respiratory collapse that put me through a month-long stay in three hospitals, followed by many months of rehabilitation.

The present positive outcomes so many of you are now seeing were by no means assured. And more tests are still to come. However, with prayers, fortitude and the loving support of hundreds of students and clients, I have already overcome many challenges. In September and October I began slowly to teach again, gradually resuming my path as a teacher-trainer of Kundalini Yoga and meditation, Humanology, Reiki healing, Sacred Gong sound therapy, and numerology.

Now a new mark in my recovery has occurred! On Monday, December 31st, I rang out the Old Year and rang in the New Year by taking up a regular Monday morning yoga class (at 9:30 am) at Anahata Yoga, Sound & Energy Healing Studio in Scottsdale.

That morning 22 happy students arrived for that first class - they had seen me listed on the studio’s website. There were lots of hugs and laughs all around after leading a fun, invigorating yoga set, chant and gong meditation.

Yes, I may be pushing 80, but I've reached a remarkable stage where I'm “back in the saddle again” as a teacher as well as seeing clients here and by phone.

Join me in classes and workshops and twice-monthly meditation broadcasts on the Full Moon and on the 19th of each month.

[Ed. Note - In our next email newsletter, we’ll reprint an article Sangeet wrote for an international ministers newsletter on her experience of “going Home” following the second surgical procedure, and then choosing to return to life.]

Bless you in all ways always!