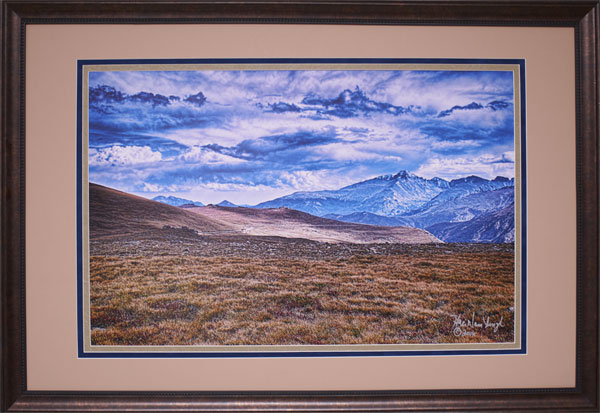 [Today's article was written by my husband, Hari Nam Singh. He presents an interesting perspective on photography and art that I thought you would enjoy! --Sangeet]

On August 26, 2016, while hiking a ridge at over 12,000’ in Colorado’s Rocky Mountain National Park I discovered this spot where everything was perfect.

The beautiful brown grasses spread out across the high plateau that yields to rocks and boulders, the cliff that drops off down into forever, the snowy mountains way beyond that seem to stretch up and blend into the stormy clouds overhead.

And those clouds! The atmospheric conditions were just right to show the clouds in deep blues and purples. The far distant mountains too were bathed in those same strong rich colors.

The sunlight occasionally peaked out between the clouds creating dramatic light for a few fleeting moments.

So I set up my camera and tripod and waited patiently for everything to be “just right.”

And then it happened – the skies were turbulent and deep blue, the grasses in the foreground were in shadow that brought out texture, color and hints of frost. The mountains merged with those clouds. And then the sun pushed the clouds aside and cast a spot light on Trail Ridge Road just as a red bus and a car crossed into the light.

That moment was gone in an instant. Maybe to never happen again.

When I returned home to my studio the photograph did not look like I remembered it.

So, what’s a guy and his camera to do? Challenge himself, of course! Could I coax out of that file what I remembered? Would the result still be a photograph or would it take that perilous slide down that slippy slope leaving “photography” as a distant memory and entering the nebulous world of “art?”

I returned to the raw converter software and explored the hidden world in that raw picture file. I discovered that the blues and purples were indeed in there and needed to be brought into dominance.

When all was said and done, what you see here had no Photoshop work done at all.

Just the raw converter to bring color and texture details into prominence, and a tool to help with contrast, micro-contrast, saturation, and crispness. There were no layers or masks used. Nothing was added or removed such as clouds, rocks, cars, people, etc. The white balance and exposure remained about the same. And the image was not cropped.

So, I ask you, even with this minor amount of computer darkroom work, is the result still a “photograph?”

I’ve always believed that “photography” is about “drawing with light” and that most, if not all, of the “work” is done in the camera, not in a darkroom. Further, that the darkroom activities should be limited to “compensation” efforts that make up for or work around limitations of the camera (including the lens, film / sensor, and lighting).

In the end, a “photograph” should be similar to the scene it is representing, subject to the abilities of the camera.

This is not to say that one can’t go crazy with “bendy” lenses (e.g. “bellows lenses” common on large format cameras), goofy lens filters, unnatural lighting, film cross-processing, light painting, a million digital “push-button instant” filters, adding or deleting things (e.g. Art Wolfe adding zebras to a watering hole or Ed Freeman adding taller waves behind a surfer), and all the photograph manipulating techniques yet to be invented or even dreamed of.

This is okay, in fact, all this manipulation is really healthy. It provides a creative outlet for anyone to create what they “see” inside and optionally share it with their family, friends or the world.

What I challenge you to consider is that even though you started with a photograph, your creative process, whether in the “real” world (e.g. a darkroom) or the “imaginary” world (e.g. computer or smart phone) is a one-way transformation of that photograph into “art.”

Art can be good and healthy and important but it is not photography.

Let me state that again: a person’s photograph altered enough undergoes a metamorphosis and emerges as art, leaving the carcass of photography behind.

This photograph was my first travel down that slippy slope landing on a plateau high in the Rocky Mountains and being filled with the sensory overload of God’s creation.

I’ll leave you with this thought:

An apple farmer, in concert with nature, creates a most perfect Braeburn apple. It is complete, whole, and enjoyable just as it is. A baker comes along and thinks “That’s a nice apple, but I can do better” and turns it into an apple pie.

Note: It is worth reading the following article by Rob Haggart, retired photo editor at Outside magazine, who realistically addresses this point of the boundary between photography and art.