Thousands gather to sing, laugh in glee and hug, full of the wonder of this scene straight out of a Norman Rockwell painting.

And the tallest lighted tree of all – over 100 years old – is a giant fir planted as not much more than a seedling in 1912 when this capital of the Arizona Territory announced statehood.

Small informal groups of carolers stood singing on street corners and serenaded us in the little antique shops around the square.

What could be more fantastic, provide more simple joy? Our hearts were smiling.

We headed off on a short drive to the local health food store for a warm tea before starting the drive home to Phoenix. To our dismay, the store was closed. We turned around to head home. Then, a few streets onward, right in front of us was a short line of cars turning onto a small alley-like, unlit street. Curious, we decided to turn in also. What could be ahead?

Look at what greeted us – a Christmas wonderland of dancing lights! The lights surged and changed in color, dim and bright, dancing to a peppy tune, “The House on Christmas Street” which was playing on a specific radio band we were advised to tune in to in our car.

I grabbed my cell phone and started to video as we drove by, moving slowly up the hill, watching the dancing angels and reindeer, the tall arches and waterfalls, the lights bouncing across the rooftop of the house.

We sat awhile at the top of the hill, watching transfixed, then slowly drove back down with Hari Nam taking out his phone to video once again. Other cars paused giving us time to record while the full song played.

Tears of joy came to my eyes. Such a festival of lights. Like nothing I had ever seen before. And I know some folks do this in other cities.

In some way I sent a prayer to the heavens, calling out to my parents – hey Dad! hey Mom! come look at this! A long way from Philadelphia in the 1940s. At that time we had electric street cars, but no one could ever dream of this then!

Mom and Dad were right here with us in Prescott, sharing my amazement at this moment, hearing and watching this dancing Christmas scene.

Our little family always loved this holiday for the singing and the peace it brought. Born in 1939 and growing up in the '40s, I experienced Christmas as the youngest lead soprano in the church choir. But these were not lavish times. You might say they were somewhat impoverished, though never short on love.

In the years leading up to, during and after the war, there was scant money for decorations or for gifts. There was a single candle (real wax!) in the window. There was a lit star atop the tree with some tinsel and strands of sticky sweet popcorn, of course strung by me. There were 4 bright silver balls hanging from the tree, made from painted cloth with gold strands on them, handed down from my grandmother Taylor who I never knew.

During the war years there was some food scarcity and Mom and Dad planted a “victory garden” which people did to grow their own food, a practice meant to free up resources to support the troops overseas.

So there was little money for gifts. The impact of the Depression lasted well into the war years. I was a post-Depression baby and Dad had to scramble for years to find work.

So at Christmas sometimes I got a used book, or some new sheet music I would learn to play on the piano. One Christmas morning, Mom and I awoke to find very little under the tree – a gift I had made for her, and something from her to me. Her small income as a teacher had helped to make the fabulous meal we would enjoy later that day.

But where were the sweet little gift boxes Dad always gave us?

We looked around thinking Dad had hidden some gifts for us before he left early for work. Then we saw it – high up in the tree – a simple white envelope marked “For My Gals.”

Excited, we opened it. Inside, Dad had placed a single $100 bill for Mom and me. We were awestruck. Mom cried, hugging me. “We can get that warm winter coat for you, honey, and a nice jacket for Daddy,” she said to me. I could only begin to imagine how many weeks he had put in on his newspaper route to get that amount of cash money.

Yes, these were not times of plenty. But we lived without debt (consumer credit was unheard of in those days) and Dad's jobs gradually got better to augment the meager but dependable salary Mom made as a 4th grade teacher.

One Christmas years later we began to save $1 silver coins and $2 bills (now rare) which was the way we helped to finance our trips West that began in 1950. At that time we traveled by car throughout the western states, along the California coast up into Oregon and then over to Colorado where we stayed in a simple log cabin high up in the Rockies built by Mom's old college friend, Bill Gilfrey.

That little savings routine helped support us in our annual summer trips back to the Gilfrey cabin through the decade of the 50s even while I was in college. 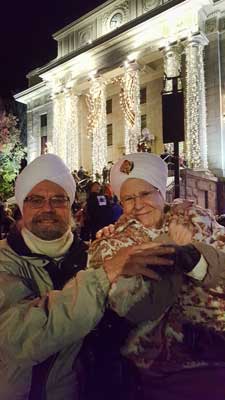 December 3, 2016 Sangeet and Hari Nam visited Prescott, Arizona for its annual choir celebration and lighting of over 100 Christmas trees on the Courthouse lawn. (Click for larger picture.)

Northern Arizona, around Prescott and Flagstaff, continues to remind me of the crisp clear air of my beloved Colorado.

So last Saturday felt like coming home. Home – here on another Christmas holiday-time, in the chill mountain air of Prescott. Here in Prescott where so many people sing and light Christmas lights, and share their goodness with each other.

When we discovered this special tree-lighting ceremony a few years ago Hari Nam and I rediscovered a piece of home from our early childhoods, he growing up on the easternmost end of Long Island and me in North Philadelphia. Like the old days, a place where strangers are welcomed, even those of us wearing turbans, living as Sikhs and yogis.

Yes there's a lot of electricity now and a lot of decorations and more money. But the old values, the eternal ways of love are still living here. Points of light like this thrive around this country and beyond. Where there is such a welcoming spirit, such a kindness of heart, there is no poverty.

From this place of spirit Hari Nam and I send prayers for all of you celebrating your special holidays.

Whatever holiday you may celebrate, keep your lights shining, keep singing your fun, uplifting songs, and keep sharing smiles, laughter and hugs.

May all people and all the paths they walk unite under all such shining examples of human spirit!

Merry Christmas,
Happy Hanukkah,
and Joyful Holidays to all,

P.S. Thank you to Judy Pancoast for her wonderful song “The House on Christmas Street.” See what Ms. Pancoast is up to at JudyPancoast.com.