Heading toward 2018: A Time for Goodness to Grow

Tonight we celebrate and bathe in the vibrations of a timeless healing chant under the celestial light of a “supermoon”, the only full-supermoon to occur in 2017. In modern and older folklore it's known as the Full Cold Moon as well as the Full Long Nights Moon as it is closest to the winter solstice.

Being designated a supermoon means the full moon in its orbit reaches perigee, in other words is closest to the Earth. This is the only super moon in 2017. It appears 8% larger and 16% brighter.

The resulting pull on the Earth's tides and geophysical structure, and on the tides of human emotions, will be at super-strength as well. The effect carries on several days before and after the moon reaches its perigee – which occurred at 10:47 am Eastern Time today (Monday the 4th).

But wait! There's more to this story!

Today's supermoon is not alone! It is quickly followed by 2 other Supermoons – an unusual succession of 3 powerhouses. The others will occur on January 1st and 31st. Yes we will be meditating together here at my home each of those evenings and broadcasting them as we will tonight.

Bless us as Women in all ways, always! 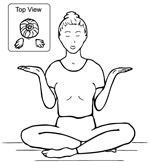